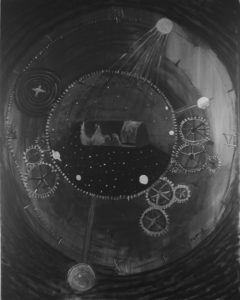 “In my opinion this idea of Anaximander’s is one of the boldest, most revolutionary, and most portentous ideas in the whole history of human thought.”  Karl Popper

Anaximander was pre-socratic philosopher who had some unique ideas on universe.  His ideas were based on observations and logic.   He considered earth as a cylindrical body un-supported in space.  The sky and stars were nearer to earth than the Sun and the Moon.   His model of cosmos was mechanical with regularity of motion.

Each of his ideas can be seen through logic and observations then known.   He considered the problem of perpetuity of support (depicted by the term “turtles all the way” ).  He logically concluded from that  “the earth needs no support”.   The flat earth concept was very much in vogue during pre-socratic times.  Based on travellers’ and probably his records of astronomical observations he concluded that the earth is curved at least in one direction.    He must have been a good mathematician to bring in whole number ratios to various distances.

The painting gets inspired by his ideas of mechanical universe.

Companion of this painting is Yugant. 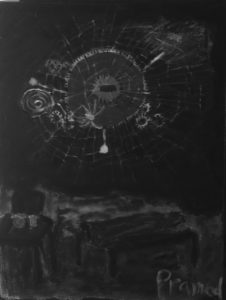 The Anaximander’s universe was depicted as a clock.   The clock will stop if it doesn’t get wound.   The painting shows stopped clock with cobwebs as the owner lies sleeping.

One thought on “Anaximander’s clock”