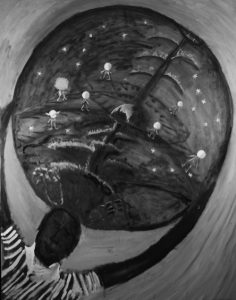 According to legend, Atlas was burdened to hold heaven and
earth together. Most of the cultures believed in seven
heavens and seven hells. In Indian mythology the seventh
hell was called Patala.

Atlas was condemned to hold celestial sphere.   The celestial sphere, some times referred as Brahmand in Indian mythology contained everything in our universe.  It included seven abyss and seven heavens.

In many cultures the planets were considered as living beings.  This was because of their irregular motion in celestial space.

The painting gets inspired by all the ideas.

The companion of this painting is the situation when Atlas is unable to hold the celestial globe together.  Yugant happens as shown in the painting. 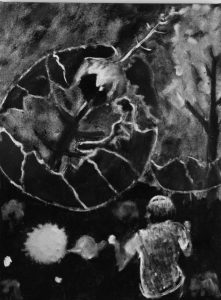