The world rose from a point singularity. The bang created a
universe which was the surface of 4 dimensional sphere. The
bang was so massive that we still hear the echo in form of
the background radiation.

George Lemaitre, who was also trained to become catholic priest then mooted the idea of big bang.   He interpreted that the going away of stars points out to the fact that everything was near to each other at the beginning.   The big bang theory  envisages that the world at its beginning started from a point.   It erupted with a bang.  All of our universe emerged from a point.

It is probable that the idea of big bang lies in the myth of Creation in Christianity.  It also has probable roots in “first cause argument” by Thomas Aquinas.

The painting inspired by all of this and also has a story of who caused the bang.

Aftermath of Big Bang Following painting is not included in the exhibition.  It was prepared on synthetic board in oil. 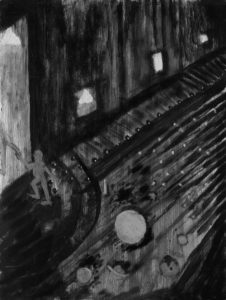 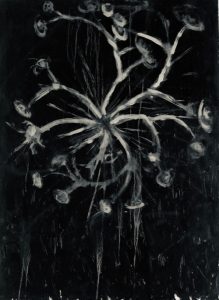 We know that the universe is like balloon.  Within the balloon there are galaxies which look similar to each other.  And within that is also a star-star system or star-planet-satelite system.   The structure sort of repeats at smaller scales also.  This lead to postulate that the cosmos could be fractal in nature.  The painting tries to find the root of fractal nature in big bang itself.

One thought on “Big Bang”