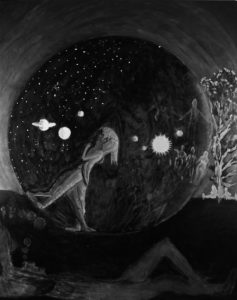 Oil on Canvas 45”x54”
Life and universe is an indivisible pair. It is meaningless to
conceive universe devoid of life and equally meaningless to
predict life without universe. The poetic myth suggests that
the divine pair is cause of both universe and life.

Nasadiya Sukta of Rigveda dwells on a question of how real world started.  Another eternal quest of mankind is how the life began.   Myths all across the world dwelt on this question.  All of these myths generally require a pair (or pairs) to start the life on lifeless reality.  Judaistic, Christian and Islamic philosophies dwell on first pair Adam and Eve.   The Mesopotamian legends of similar nature also dwell on myth of first pair.  The first pair is sometimes godly.

Hindu mythology particularly samkhya school relies on Purush and Prakriti a cosmic pair.  This cosmic pair met each other and the whole universe and life emerged.  Purusha and Prakriti also appear in Bhagvad Gita and many other prominent books of Hindu scriptures.  Shiva Shakti is also a similar cosmic pair which helps in constituting the world.

The concept of pairs is in ancient astronomy too.  The zodiac sign of Gemini emerges out of pair.  Double strand of DNA molecule is also a pair.

The painting has been inspired by all of these legends.

The Yuganta companion of this painting is quarrel.  If the pair is origin of life, unpairing by quarrelling can end the life. The painting gets inspired by this. 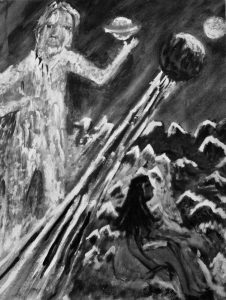 World becomes barren when the pairs quarrel. End of life is
end of universe.

Another painting was drawn (not part of this show) on the same theme. 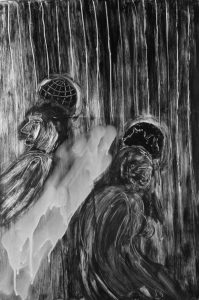 Oil on synthetic board