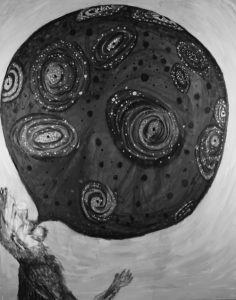 The universe is expanding slowly and steadily in a peculiar way.
There is no observed centre point of expansion in the universe.   The Universe
seems to be expanding symmetrically about each point in it.  Picture of expanding bubble with
the universe being at the surface of it,  is probably the best way to view this.

Edwin Hubble was one of the greatest man of measurements.  Modern cosmic puzzle was solved by him through painstaking measurements.   His answer to the cosmic puzzle was quite an astonishment. It proved that Universe has a very peculiar shape probably unimagined by any of his predecessors.   His contemporary  physicist George Lemaitre and him together established that our current universe is expanding.  Hubble went further and with his precise measurements he found out a constant of expansion, “Hubble’s constant”.

Hubble found that the Universe was expanding symmetrically.  His second finding was quite astonishing.  He found a relationship between speed of going away and distance of the star from earth.  He found that the speed is directly related to the distance of star.   It was quite difficult to visualise the expansion process in normal three dimensional world.  His findings were most convenient for a four dimensional spheroid with three dimensional surface.  This model of universe gave exact numbers of Hubble’s findings.

It is very difficult to imagine a 4 dimensional spheroid.  The best analogy comes from a balloon.  Imagine universe is like a dotted balloon.   The dots represent stars and galaxies.   The balloon is blown at a constant rate and the dots on the balloon move away from each other.  This moving away from each other is similar to Hubble’s observations of cosmos.

The painting is inspired by Hubble’s model of Universe.

One thought on “Hubble’s Bubble”