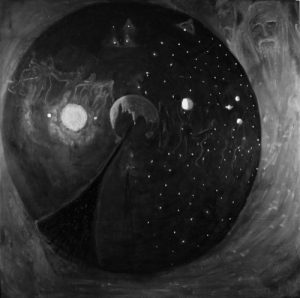 Meru, Sumeru, Mahameru lies at the center of universe.  All of the celestial bodies revolve around this mountain.

Since early ages during Greek period, and beyond, a working model of universe came in to vogue.  This model of the universe became widely accepted in various civilizations. The essential feature of this model was a rotating celestial sphere with earth at its centre and concentric invisible spheres on which planets moved.

Indians had their own variation of this model. They did not have concentric invisible spheres for the planets. The celestial sphere was called Brahmanda and it probably believed to have a physical axis. The evidence of the concept of this axis comes through the literature of the three religions of the region. In all scriptures of all three religions Mount Meru is conceptualized. This mountain has height nearly equal to the then perceived radius of Brahmanda. Buddhists and Jains claimed that this mountain is below (in the southern direction) the earth. They also claimed that entire cosmos revolves around Meru.

Probably during prehistoric times mankind started enumerating stars. They did so by naming cluster of stars with familiar figures. Eventually clusters on celestial equator got redefined and were neatly arranged into 12 clusters of equal angle and were called sun signs.  Each of these Sun signs represented a month in solar calendar.  Indian calender system progressed on different lines. Their focus was on the Moon and they developed a lunar calender with solar year correction. Naturally their clusters were different and they called them Nakshatras. Each of the nakshatra was related to one day of lunar travel. They added poetic meaning to this. To the Indians all of the nakshatras were females and the Moon was their husband who spent one day with each of them.

Meru: The Axis painting uses these legends of Meru and nakshatras.

The accompanying yuganta painting dwells on possibility of broken axis 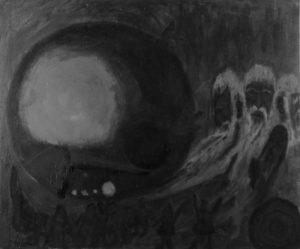 The Sun will explode and become large enough to swallow earth.  Our era will come to an end.  Yugant will also happen when the axis of  the world breaks down.

According to an early Indian legend the Meru was both above (north) and below(south) the earth. The above portion of mount Meru broke down and fell on the earth, and thereby forming Lanka.

Similar to this,  bottom part of Meru can break off. This will cause the end of the world. The painting depicts this along with other reaction of other players.

4 thoughts on “Meru: The Axis”