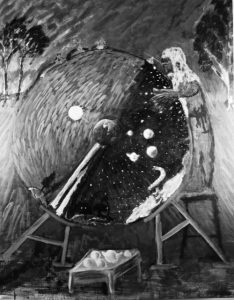 Myths predict existence of a very large mountain comparable
to Meru the Axis. The mountain stands in sea of milk and
was used to churn it. Mandar the Churner extracted the moon
from celestial sea of milk.

Mount Mandar appears in the legend of samudramanthan. In this legend the mount mandar was used as a churner to churn the ocean of milk. According to legend this mountain is also comparable in size that of Mount Meru. So the legend expects it to be non terrestrial mountain within cosmos standing near celestial sea of milk.

The painting depicts both these mountains and celestial ocean of milk.