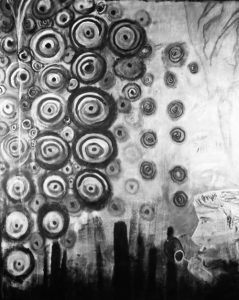 The world is limited to what we observe.
Whatever we can’t observe is not reality.  Act of observation changes the reality.
The Schrodinger’s cat is sometimes dead and sometimes alive.   There are simultaneous multiple worlds.

What is the limitation of reality?  Realism demands that the world exists and is observable.  But is there any reality beyond observation?  German scientist Heisenberg started a philosophical revolution when he formulated his famous uncertainty principle.   The principle then led to philosophy that the real world is limited to what we observe.

In everyday terms “if you do not go to your office the office doesn’t exist”.   This can be called as extreme realism.   This also led to famous paradoxical situation called  “Schrodinger’s cat paradox“.  This paradox was stated by famous scientist Werner Schrodinger.   In this interpretation the cat is sometimes dead and sometimes alive.

The painting is based on this philosophical interpretation of reality. 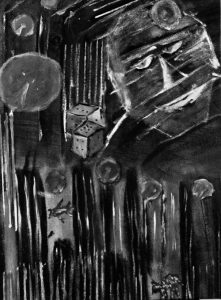 The multiple worlds of quantum is probabilistic interpretation of reality.  The probability of life ends with actual observations.

The observation kills several probabilistic realities.  This statement is inspiration of this painting.

The next painting is not included in the exhibition.   It is on synthetic board. 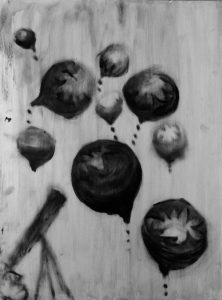