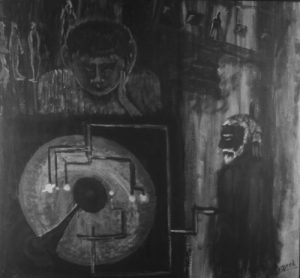 Oil on Canvas 45”x45”
Nachiketa travelled on foot to meet death. On the way he
came across the wheel of time. The relentlessly moving
mechanism intrigued the boy. Was it a mechanism or was it
real world itself?

The legend probably was more vividly described in other scriptures.  In one of the versions of the story I read, Nachiketa takes the most difficult journey on foot.  On the way he travels through patalas (abyss)  to reach death’s abode.  As he nears the house of the death he observes a wheel with interesting features.  Later he learns that the wheel is what is called as Kaalachakra.

Kaal usually means “time” in sanskrit.   What Nachiketa observed was a time wheel.  However Kaal also means death.  Probably implying that the death is time bound. Kalachakra happening near death’s house seems logical although it is not part of original tale.

The painting is inspired by the tale I read.  I imagined the Kaalachakra to be more like brahmanda than a two dimensional wheel.  Nachiketa is keenly observing the motion in the back drop of death’s house.

The accompanying painting is about the Nachiketa’s journey through Patala by going down the Meru. 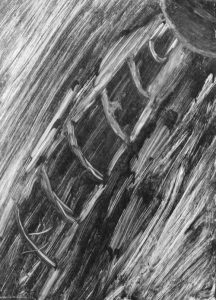 Nachiketa travels to abyss and beyond on foot. His journey
takes him down the mount Meru.