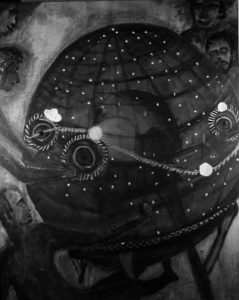 Ptolemy’s idea of world prevailed for more that 1000 years.
His charts were perfect and his maps were also good.

Idea of cosmos started to look more firm after Ptolemy wrote his book Almagest.  His idea of cosmos emerged triumphed amongst the then various popular ideas.   His theory of cosmos was so strong that it  prevailed for about 1500 years.   It ended when ideas of Copernicus and the observations by Galileo demolished the earth centric model of Ptolemy and Aristotle.

The heroic struggle of Galileo and beginning of new era of science captured minds of modern mankind to a great extent thereby denigrating Ptolemy’s idea of universe.   To be fair to Ptolemy and his predecessor Aristotle one can say that the their cosmic theory was based on facts known to them.  There was no probable religious basis of his idea of fixed and central earth.  It was based on pure observations and scientific argument.  Aristotle and Ptolemy knew that earth was spherical.  It was easier to imagine that the earth rotates around its axis.  Aristotle considered this possibility and rejected this idea on the basis of observations.  He argued that if earth was to rotate there would be considerable unidirectional wind on the earth’s surface.   Since this wind is not observed earth does not rotate.  There are similar arguments (arguments of parallax) against earth rotating around the Sun.

Ptolemy was also a geographer.  His ideas of almanac and geographical maps were continuously used and contributed vastly for mankind to reach age of reason.

The painting although inspired by Ptolemy’s idea of Universe does not depict it as envisaged by him in terms of crystal spheres within each other.