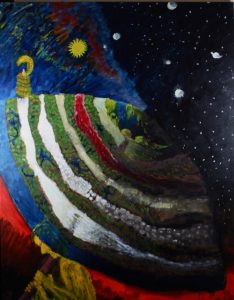 Oil on Canvas 45”x54”
Contrary to what we perceive now, ancients considered seven
seas as concentric circles of seas with land in between. The
seven seas consisted of salt water, can juice, wine, ghee,
curds, milk and sweet water. There were seven land masses
in between them.

Sapta sagara par is a term often used in contemporary literature of Indian origin.  It usually means a far off land beyond seven seas.  Seven seas is also a popular concept in other cultures.  The name seven seas is still being used in commercial products.   As per today’s geography there are no seven seas, they are either more or less.  The ancient and middle ages this term was probably coined by the sea travellers.

The seven seas and seven land masses emerges out of the basic concept that earth is flat and disk like.  In a book named Bhugol Varnam the seas and land masses are described. The seas are not the salt water seas of todays world but are of fancy material such as wine, cane juice, milk.

The painting does not depict earth to be flat as envisaged in the mythical stories.  The painting has slightly curved surface forming a partial spherical disk.  This is done in order to cater for sea worthy peoples knowledge about latitude and curvature of earth.  The curved partial disk also makes way to form an umbrella with mount meru as its holding stick.  Since one of the seven seas is made up of milk, the mount mandala is also depicted along with the snake used as churning chord.

The accompanying painting shows that the umbrella is closed by the holder as it is no longer needed.