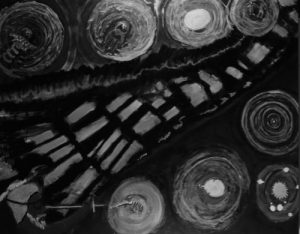 Mankind struggled to solve the problem of navigation and
structure of universe. Both interconnected puzzles were
solved using simple mechanical instruments. Cross staff
was one of such handy instruments which made this possible.

Through several generations, through number of centuries mankind strived to find out nature of cosmos.  Learned men strived to find logic behind motion of planets. In pursuit of this quest stars were enumerated. Star shapes were given names.  Spherical Trigonometry a new branch of mathematics was invented.   Multitudes of calculations were performed.  Sine, cosine tables were learnt by heart.  Records were kept for centuries to get them deciphered.   All these efforts yielded to new era of science.  With the new science  several mysteries of cosmos were solved.

The efforts by intelligent travellers also can’t be ignored in this context.  With their records it became well established that the earth is spherical.  Distance of moon from earth was quite accurately established.  Both these important discoveries are now more than 2000 year old.   Mankind’s use of astronomy is a phenomenal event.  It is said that the aborigines also used astronomical navigation to reach distant islands in sea. When Vasco da Gamma travelled from Portugal to India he used a navigational device called astrolabe.   This device was one of the first mechanical computer which crunched the numbers.  The astrolabe was quite popular in middle ages and Vasco da Gamma came across Indian versions of the same.

On the instruments side, mankind made tremendous progress after the discovery of telescope and other precision instruments.   Prior to those instruments, humankind used simple devices which helped humans to reach safely to places from high seas.  With these instruments and with the help of almanac tables and mathematical tables, sailors were able to calculate position of the ships on the globe.

Gola, Bhagana, Chakra, Ghati, Shanku, Shakata, Kartaryaha, Pipta, Kapal, Shalaka were some of the instruments used by Indians in ancient time.  These instruments, although looked simple were probably constructed precisely during those times.

One of such instrument “the cross staff” a truly hand held instrument to measure angles caught my attention.  The painting is tribute to the struggle of humankind and as an icon I have chosen cross staff and one eyed pirate for the painting.  It also depicts Yugarambh (beginning of an era) for some of the theories and myths.

Pirates have been iconised as one eyed persons.  This iconisation has happened probably because sailors used one eye patch to take astronomical readings of the Sun.  To me he represents a knowledgeable man who guided the ship to safe havens.