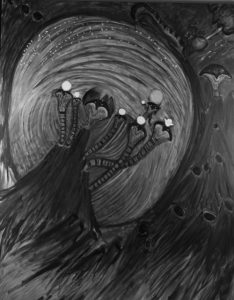 Celestial snakes hold earth and other planets on their heads.
The snake charmer makes the serpants move to cause
celestial movements.

Snake is rare amongst the support of the earth .  Mahabharata’s aranyaparva holds a legend that earth was borne by the cosmic serpent “shesha”.    Snake being a supple and narrow support can be imagined to move the earth more frequently than other firmer supports such as ox, turtle, elephants.   The legend of snake bearing the earth probably comes from the fact that snakes live underground.  And it must be some underground animal which supported the earth.

The painting is more of figment of imagination than myths.  Suppleness of snakes is used to hold all the planets along with earth.   Snake charmer is probably charming them to hold everything in place.

The yugant companion of this painting is called “Disturbance of snakes”.  It relies on the fickle nature of snakes. 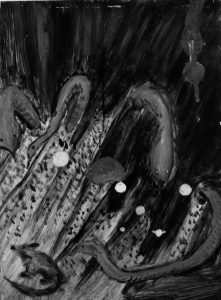 The snake charmer’s efforts fail to stop the snakes
abandoning their role of with holder of the earth and planets.

3 thoughts on “The Snake Charmer:”