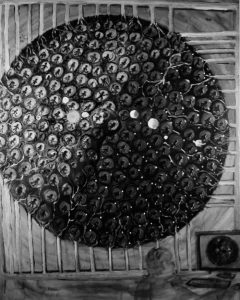 Each of us lives in one’s own universe. There is no real world
but figment of our imagination. There is no truth but self.

World is according to what we perceive is the source doctrine of idealism.  The world is in our ideas.  There is no real world but only ideas.  Although the theory of idealism surprises many it can’t be refuted by logic or observations.

Indians were much more into the theory of idealism.      Both Hinduism and Buddhism have elements idealism.  Vedanta philosophy by Shankaracharya coins the phrase  “ब्रह्म सत्यं जगन्मिथ्या” which probably means “world is false and only truth is brahma”. “The Matrix” movie is also one is a kind of idealism.

The painting is influenced by the concept of idealism.

End of virtual worlds is influenced by this thought process.