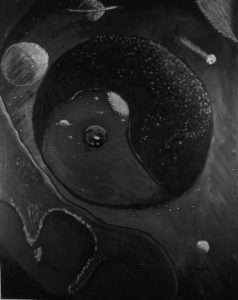 Famous scientist Halley predicted that earth could be hollow
and there could be another world with in earth. During
middle ages this belief was held by few learned men.

The idea of abyss prevailed for many centuries and in many civilizations.  Some travelers probably claimed to have visited abyss by going under the earth.  Indian mythology stated that Patal (another name of abyss) was ruled by serpents.   King Bali abdicated his throne and went to rule abyss.

Edmund Halley who was fellow scientist of Isaac Newton probably believed in abyss.   During his time a great scientific revolution was in offing.  Newton was busy in giving mathematical and physical reasoning to heliocentric system of Copernicus.  With earth loosing its support idea of abyss was taking a beating.

Halley whose discovery of regular motions of comets reinforced the ideas of heliocentric universe was a very keen astrophysicist.  He probably toyed with the idea of gravity before Newton.  Later he induced Newton to publish his ideas on gravitation and motion.

He probably wondered about the whereabouts of abyss and came up with a theory that abyss lied below earth surface.  He theorized that the sphere of earth was hollow and contained the world of abyss.  This idea of hollow earth probably influenced many.  Recent movie about “journey to earth’s center”  and Jules Verne’s book of same title were based on the idea of hollow earth.

The painting depicts the idea in different way where several worlds lie within each other.